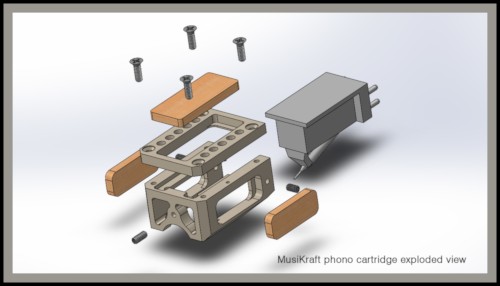 With the industry already flooded with phono cartridges covering a large price spectrum, the decision to introduce a new cartridge to market was not one taken lightly. It was imperative that it would have to substantially differentiate itself from the rest not only practically but more importantly in sound. Our study was performed during a five (5) year period.

From the onset we addressed what we felt were most missing from everything out there regardless of price: mainly tone-ability, recyclability and extreme ease of setup. Many decades ago it was common to see preamps and integrated amps sporting multiple tone controls that enabled listeners to tailor the sound to their liking. This sonic flexibility unfortunately entailed signal circuit complexity, and was the primary reason to abandon the latter for the “straight wire” principle adopted by the vast majority of the high end industry since the 1980s or so. Frustrated by the fact that we are often “strappled” by the sound of the sum of our components, we elected to once again offer the audiophile-music lover the possibility to customize one’s sound in relation to its surroundings–room, associated components–and sonic tastes, but to do it mechanically rather than electrically; thus keeping the signal as pure as ever.

We accomplished this in a fully modular and recyclable concept in a unique precisely-machined two (2) part housing design – top plate and base- which at first sight allows for quick generator servicing or interchangeability. This shell assembly is built to accept three (3) small pieces of either wood species or other upgradable material inserted within our numerous metalized structured shells of varying weight and finishes. In addition, three (3) micro-setscrews – two (2) lateral and one (1) frontal – to control mechanical resonance allowing delicate fine-tuning of the cartridges interpretation of certain sonic parameters; in effect permitting personal voicing of the final system sound or satisfaction control. To address our third requirement, the top plate of the housing complies with EIA standards with ten (10) threaded holes instead of the usual two (2), thus providing ample setup possibilities without the need of displacing the tonearm for proper overhang. The sharp-edge squarish profile and face was also a deliberate decision to ease the setup with strong visual cues, for proper visual VTA and azimuth alignment. The concept is particularly well suited for unlimited aftermarket upgrades.